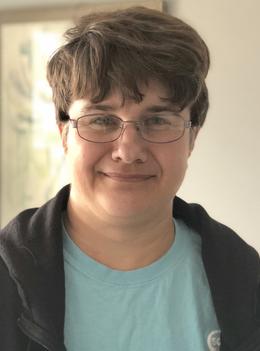 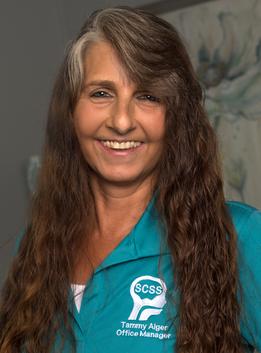 Meredith is an ASHA certified speech language pathologist who resides in Fayetteville, NC with her husband, three daughters, and miniature Australian Shepherd.  A Colorado Native, Meredith earned both her bachelor’s and master’s degree from the University of Northern Colorado, and has been practicing since 2002.  Meredith has additional training in Autism, and obtained a graduate certificate in Autism Spectrum Disorders from the University of Colorado at Denver.  Meredith began her career working with adults in acute care hospitals and outpatient rehab centers.  She transitioned to pediatrics in 2009, where she developed a particular interest in Autism Spectrum Disorders and Augmentative Alternative Communication. In her free time, Meredith enjoys watching her children play sports and travelling with her family.

Audrey is a recent graduate of California State University, Northridge’s Speech-Language Pathology, Master of Science program. She will be completing her Clinical Fellowship Year at SCSS. Audrey completed her undergraduate degree with a dual major in Communication Science and Disorders and Psychology at the University of Houston in Texas. During her master’s program she was placed in elementary schools and in early intervention for Cumberland County schools. Her interests include pediatric dysphagia, early intervention and therapy with school-aged children.

​​Meet our physical and occupational therapists at SMSS 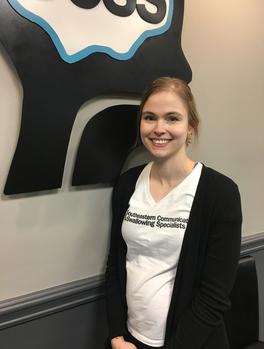 Stacey has worked many jobs, from quality control labs, research and retail to different library positions. Originally from Michigan, she has lived all over the Midwest, and East coast. She has been married for 26 years and has 4 children. She is an avid reader who loves historical fiction and is a prolific quilter.

John is an ASHA certified speech and language pathologist who resides in Fayetteville, N.C. with his wife, son, and daughter. He earned his bachelor’s degree in Communication Disorders from Western Carolina University and his master’s degree in speech and language pathology from East Tennessee State University. John has been practicing as an SLP since 2007. He has experience working with a variety of speech and language disorders in early intervention and with school age children. His interests include pragmatics, AAC, and semantics. When not working, John enjoys spending time with his family, soccer, plants, and fishing.

Jeanette Dickson is an ASHA certified speech and language pathologist who was a social worker prior to a career shift to speech pathology. She completed her undergraduate work at Gannon University in Erie, PA, and completed her MA in speech and language pathology in 2015 at Edinboro University of Pennsylvania. Since that time she has worked as a pediatric feeding specialist on feeding teams and as an inpatient feeding/NICU therapist in children’s hospitals in Ohio and North Carolina, with a focus on infant and toddler feeding in particular. She is in the process of obtaining her Certification in Neonatal Therapy and is also a volunteer with The Dysphagia Outreach Project and a mentor for the ASHA Step Program and others looking to expand their knowledge and skills with pediatric feeding. She lives in Pittsboro, NC, with her husband and five children. 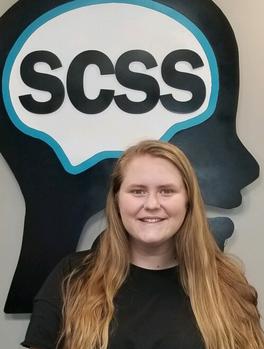 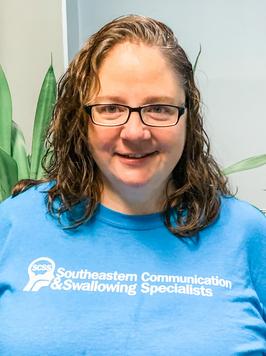 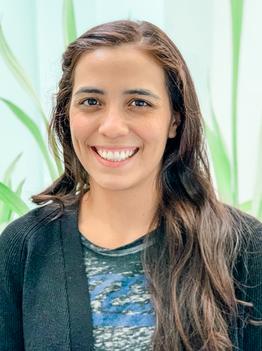 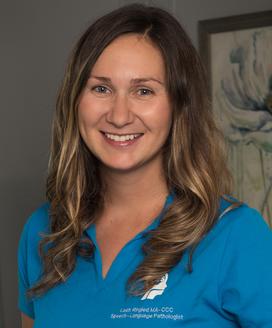 Leah Ringled is an ASHA certified Speech-Language Pathologist who resides in Fayetteville, NC with her husband and three young children. She has been practicing since 2011. She completed undergraduate and graduate training at The University of North Carolina at Greensboro with special interests in motor planning disorders, cranial facial abnormalities, and feeding/oral motor therapy. Leah’s areas of interest continue to be in medical related speech language disorders to include pediatric feeding and swallowing disorders as well as literacy and executive function/skills delays. Since beginning her work as a SLP, Leah has completed multiple identification and treatment of literacy-based disorders and executive function and skills disorders and pediatric feeding/swallowing disorders. She is certified in pediatric vital-stim and has completed training in orofacial myology. 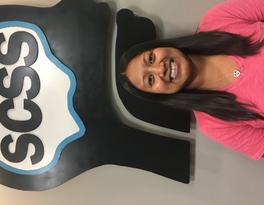 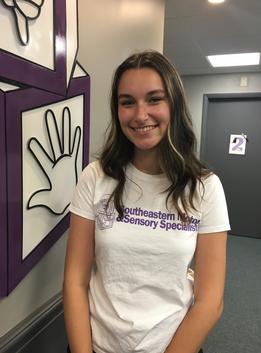 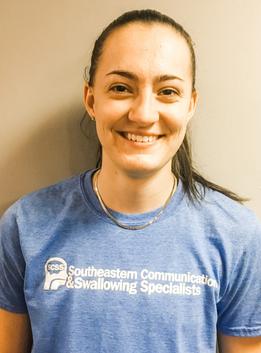 Tammy retired from retail after 28 years to come to work at SCSS. She is a Fayetteville Native, has been married since July 1984, and has 3 children and 4 grandchildren. She is an avid animal lover and has many dogs, cats, chickens and ducks. She prefers the mountains over the beach and loves to fish. She would love to retire and live in the mountains. 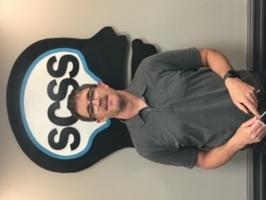 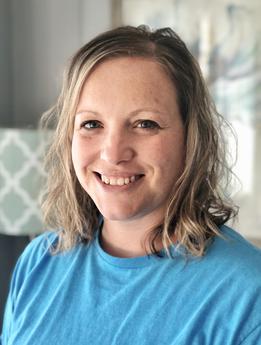 Monica is an ASHA certified SLP that lives in Fayetteville with her husband, son and 3 dogs. She completed her Masters in Speech Pathology at the University of South Carolina and has been practicing since 2014. Since beginning her work as an SLP Monica has completed multiple trainings in pediatric feeding/swallowing. She has experience working with premature infants, children and adults with speech, language, cognitive and swallowing disorders. Her interests include pediatric dysphagia and traumatic brain injury. In her free time Monica loves spending time with her family and baking.

Anali recently received her Master of Science in Communication Sciences and Disorders from North Carolina Central University in Durham, NC. She will be completing her clinical fellowship year at SCSS. During her time at NCCU, she completed the curriculum for An Interdisciplinary Project to Prepare Culturally Competent SLPs to Provide Services to Children with Disabilities. She received her Bachelor of Arts in Communication Studies from the University of North Carolina at Chapel Hill in 2012. Anali is also a Board-Certified Assistant Behavior Analyst (BCaBA) since 2016 and has previously worked in the field of Applied Behavior Analysis (ABA) since 2013. She has completed additional trainings and webinars in LAMP WFL, UNIDAD, PECS, and Pediatric Feeding. She is a native Spanish speaker. Her interests include Autism Spectrum Disorders, AAC, and Feeding and Swallowing Disorders. In her free time, Anali loves spending time with her family and friends. 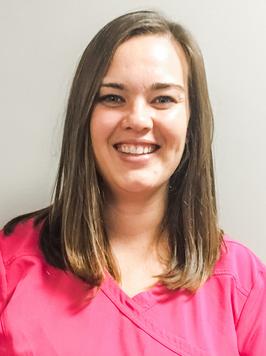 Julie Staude is a recent graduate of North Carolina Central University’s Speech-Language Pathology, Master of Science program and will be completing her clinical fellowship year at SCSS. She completed her undergraduate degree in psychology at Fayetteville State University. She had previously work in the school system as an SLP-Assistant, working a diverse population of children and disorders. During her master’s program, Julie had the opportunity to be placed in a variety of settings including inpatient and outpatient hospitals, elementary schools, pediatric private practice, and studied abroad in China. Julie’s areas of interest include dysphagia, autism spectrum disorders, and early intervention. In her free time, Julie loves traveling and spending time with family and friends. 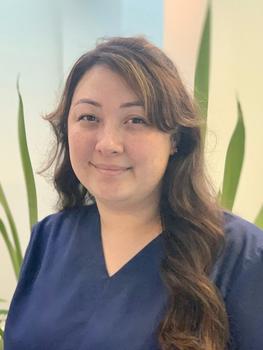 Casey is a recent graduate of Francis Marion University’s Speech-Language Pathology, Master of Science program and will be completing her Clinical Fellowship Year at SCSS. Casey completed her undergraduate degree in Communication Sciences and Disorders along with a minor in Special Education at the University of Massachusetts Amherst. During her master’s program, Casey had the opportunity to complete clinical practicums in the Francis Marion University Speech and Hearing Clinic, elementary schools, and pediatric private practice at SCSS. Casey’s areas of interest include autism spectrum disorder, pediatric dysphagia, and early language. Casey lives in Fayetteville with her husband and their dog.

Maddie is ASHA certified SLP that lives in Fayetteville with her husband. She has been practicing since 2016. She previously worked at an elementary school for 5 years with preschool to 6th grade students with communication needs in California. She completed her undergraduate training at Sacramento State where she was apart of the gymnastics teams for all 4 years. Then completed her Masters in Communication and Science Disorders from the University of Texas at El Paso. Since beginning her work she has completed trainings on PECS, ADOS, and AAC. Her current interests are to continue to expand her knowledge in AAC and learn more about pediatric feeding and swallowing.